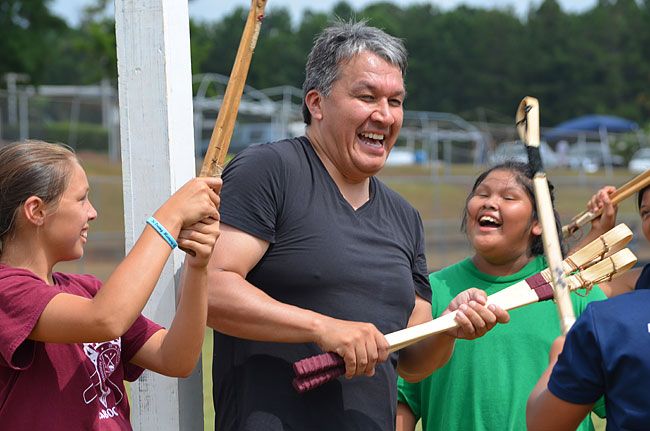 Warrior Games follows the journey of its host as he travels in search of Indigenous traditional/contemporary sports. Warrior Games is produced by Steve Sxwithul’txw and is available on APTN and APTN’s streaming services Lumi.

This docu-series, which began airing on Sept. 6, 2014, sees Steve Sxwithul’txw, who is from the Penelakut Tribe in BC, travel across Canada, visiting various Indigenous communities and engaging in sports with the youth.

As Steve carries on with his journey, he is faced with the tedious task of trial and error, as he sets out to learn under the guidance of Indigenous youth as his mentors in sport. Throughout his successes and failures, Steve keeps a warrior’s spirit as he sets out to learn the deeper meaning of sports, and show how they connect people.

There is currently a 2.44 per cent demand for Warrior Games within Canadian audience (according to figures provided by Parrot Analytics, 2020). These figures show how this series is bringing attention to the physical, emotional, spiritual and mental aspects of youth which can benefit through the use of sports.

The 13 part docu-series, Warrior Games, was produced by Sxwithul’txw’s production company — Kwassen Production Inc. throughout 2012/2013. During this time Steve learned sports such as stickball, lacrosse, archery and canoeing while he was filming each episode.

Each episode consists of 22 minutes of airtime which is broken into segments that consist of introducing the sport and introducing the special-guests invited onto the show. A key part of each episode is Steve’s sense of humor as he delves into the world of traditional and contemporary sports.

The genre of this show is best described as a blend of reality TV and documentary. Each episode is dedicated to a specific traditional/contemporary sport of Indigenous people in Canada as Steve records his interactions with his youthful mentors.

Although the series focuses primarily on Indigenous sports, Sxwithul’txw has stated, “the message he sends in Warrior Games is about not just First Nations youth, but all youth getting outside and embracing sport.” (2014). Steve may not always be the winner, he never takes sorely to losing and showcases humility and humbleness in the world of sport as a role model for the youth.

This APTN series is a great way to introduce traditional/contemporary Indigenous sports to the mainstream media while also bringing awareness to Indigenous culture. Sports are a perfect way to communicate with youth as it involves a healthy mix of physical, emotional, spiritual, and mental strengths which are guided by rules and regulations. These principles are key elements which greatly affect the state of life for many Indigenous people; and sports offer a healthy coping mechanism.

This docu-series is a great initiative in bringing attention to the importance of involving youth in the realm of sports. According to an article in the Times Colonist in Victoria, Sxwithul’txw, “Too many youth are getting caught in the conundrum of video games and being static and not moving and not getting out like we did.” This quote shows that Warrior Games is more about getting youth involved in sports than it is concerned with the cultural aspect of sports; however, as an Indigenous person I feel it is important to acknowledge the importance of culture within traditional sports.

The docu-series does a great job of showcasing traditional/contemporary Indigenous sports while also being easy to watch and is presented in such a way that you would like to experience participating in the game/sport yourself. It also establishes a humorous relationship between the host and the audience, which makes watching Warrior Games totally worth the time.

However, this show could do a better job of being more inclusive with cultural teachings and stories of how the sports originated. That being said, Warrior Games is a television docu-series that is worth the watch as it showcases much more than traditional/contemporary sports but also provides Indigenous youth with an experience of a lifetime while also restoring honour to Indigenous sports.

In my opinion, this series deserves a 4 out of 5 star rating

Indigenous Communication Arts (INCA) is a multi-media program at First Nations University of Canada. For registration information visit www.incaonline.ca.  Follow us on Twitter at @INCA_FNUNIV